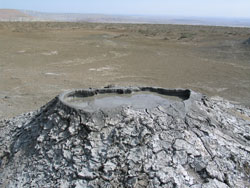 Azerbaijan is the only country in the world in the territory of which there are almost half of all existing mud volcanoes on the planet. On the AbsheronPeninsula, Gobustan area, south - eastern Shirvania and Baku archipelago are located 300 of the 800 mud volcanoes existing in the world, 84 of which are located in the vicinity of Baku. By diversity and activity there is no a territory, similar to Azerbaijan in the world. Here are located various types of mud volcanoes: active, dormant, buried, abundantly oil evolving, underwater, island. At present, mud volcanoes got the status of natural monument and are protected by the state. Mud and clay of these volcanoes and also volcanic water can cure many diseases. They contain a large number of different chemical elements. The most interesting and attended by tourists is a group of active volcanoes, located on the road of the Baku-Alat, 10 km south of Gobustan village and the volcanoes near the area Dashgil.