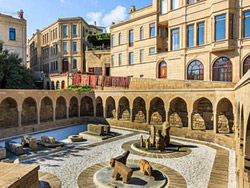 Ichari-Shahar is the Old City or the Inner City, which is located in the heart of Baku, and is a real town-planning and architectural preserve, surrounded by the fortress wall. Presumably, the time of Icheri Shahar`s building dates back to the XII century. The OldCity is one of the most densely populated areas of the Middle East, because its settlement dates back to the Bronze Age, as indicated by the numerous excavations and research. Until the beginning of XIX century, in fact this block of the city was inhabited by several thousands of people and formed the city of Baku.

There were special blocks in the fortress, which originally were inhabited on basis of some common features. In 1865 the southern part of the fortress wall was demolished, its stones were sold out, and the money spent on the building of the Baku Boulevard.

A Significant place in the Inner City have Shirvanshakh`s Palace, dating back to the XV century, erected when the Shahs moved his capital from Shemakha to Baku. The complex is still used for festivals of folk dances. There is the Museum of Archeology at the Institute of History and Ethnography of Azerbaijan National Academy of Sciences in Inner-Shahar, located next to a carpet shop, which has an exhibition hall, where are often held exhibitions of Azerbaijani carpets. Inner-Shahar Complex received the status of historical and architectural preserve in 1977, and since 2000 it is included in the UNESCO list of World Heritage.