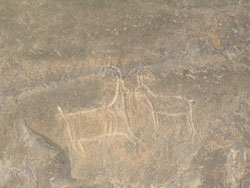 Petroglyphs found in Gobustan is an artistic heritage of world significance, the value c which is comparable to similar findings in Scandinavia, Perinea, Africa, Central Asia, Siberia, Karelia. The mountainous area in the south-east of the Great Caucasus mountain range, located 60 km away from Baku is a real open air museum where you can see with your own eyes rock paintings, carved by primitive people on the walls of caves, cliffs and boulders, as well as ancient settlements, stands, mounds, tombstones. This is an evidence of the past of the Azerbaijani people, which belong to different epochs and are dated from 10 - 8 millennia BC to the Middle Ages. The oldest petroglyphs relates to Mesolithic, but it is assumed that life existed here even earlier, which makes Gobustan one of the cradles of civilization.

Petroglyphs show the culture, economy, philosophy, customs and traditions of ancient Azerbaijanis. Here you can see hunting and  collective labor scenes, drawings of individual and group ritual and ceremonial dances of the modern Azerbaijani folk dance Yala. For Gobustan are typical male and female rock paintings. Silhouette images of people almost life-size are among the most ancient and dated to the early Neolithic period (VIII millennium BC). After silhouette images of people followed the contour drawings of wild bulls, made in a life-size - some of them reach 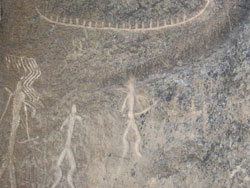 240 cm in length and about 140 cm in height. Images of people armed with bows date back to the period of the VII - IV millennium BC, when hunting played an important role in people`s lives. Among the many paintings of this period attention is attracted by images of boats with rowers, which indicates that the ancient settlers were good sailors.By the coverage of such a large historical period, rock carvings in Gobustan hold a high position among the rock collections of the world, taking this fact into account, on Sept 9, 1966, it was decided to transform an area of 4.4 thousand hectares in Gobustan into the National Reserve.