Baku is a modern capital of Azerbaijan, cultural, political and economic center of the republic, as well as the largest port of the Caspian Sea and the largest city in the Caucasus. By antiquity, large area and population, Baku is considered one of the oldest and largest cities in the East. It is considered that the word Baku means a "windy city", which is connected with the Iranian word Bad-kube. Perhaps such an unusual name was given to the city because of the local strong winds. According to another version, the name derives from the Persian word Baghkuh, which means Mountain of God, and not infrequently compared with the Iranian word Baghdad, translated as God-given.

Downtown is located in the form of an amphitheater, with projections going down to the BakuBay. Planning of the city is rectangular, only in the old part of the town within the fortification streets are crooked and narrow. In the suburbs of the city, there are a lot of mud volcanoes and salt lakes. City boundaries include resort area of Apsheron peninsula with coastal beaches. Scientific and cultural life of the country is concentrated In Baku  . Here are located numerous theatres, museums, galleries, universities and libraries. 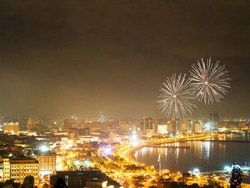 Baku is located on the western shore of the Caspian Sea in the southern part of the Apsheron peninsula. The city occupies a vast territory, which area is about 2.2 thousand sq. km. The city represents a large agglomeration and divided into 11 administrative districts.

The climate in Baku is warm with hot humid summers and short mild winters. Average July temperature is around +26 ° C, in January is around +3 ° C. The southwestern part of the Greater Baku is the most arid part of Azerbaijan. It is characterized by strong northen winds. In general, however, the climate of modern Baku greatly mitigated by gardens and parks, which are lovingly grown by inhabitants of the city. If in the early twentieth sometimes it was impossible to go out on the streets of Baku because of the strong wind with dust, but today Baku became a warm and comfortable for living city.

The population of Baku on April 13, 2009 is 2 246 thousand people. After joining Russia Baku became an international city, and even after the collapse of the Soviet Union there remains a large number of representatives of various nationalities. According to the 2000 census on the territory of Baku reside 82,7% of Azerbaijanis, 5,6% - Russians, 5,5% - Armenians, 2.8% - Lezgins, as well as the Avars, Ukrainians, Tatars, Jews, Talyshes, Turks, Georgians, Kurds, Udi - 3,4%. The state language of Azerbaijan is Azerbaijan.

Baku is the city where eastern and western cultures are blended and poured into beautiful works of art, including architecture. Within the city ruins of ancient and medieval cities are located. Most major sights are situated in the fortress of the Old City. It includes more than 10 mosques built in different periods, since 1078.
Baku amazes guests with unique architecture and rich cultural heritage, that is why Azerbaijan Tours cannot pass by this City of Flames. In the central part, built up, mostly in the beginning of last century, buildings are made in different styles. Despite the mixture of styles, the city has found its individual artistic appearance. In connection with the oil boom, there began to appear modern architectural constructions. There were built museums, theaters, concert halls, art galleries, sports complexes, stadiums, swimming pools, numerous hotels and restaurants.

Baku is the city with a very ancient and rich history, records of it appears in the 5th century. However, its emergence dates back to an earlier time, as were proved by numerous archaeological finds: petroglyphs carved by primitive people on the walls of caves, cliffs and boulders.